Memphis coach David Fizdale addressed the media after their loss to the Spurs and he was not happy with the referees.
USA TODAY Sports 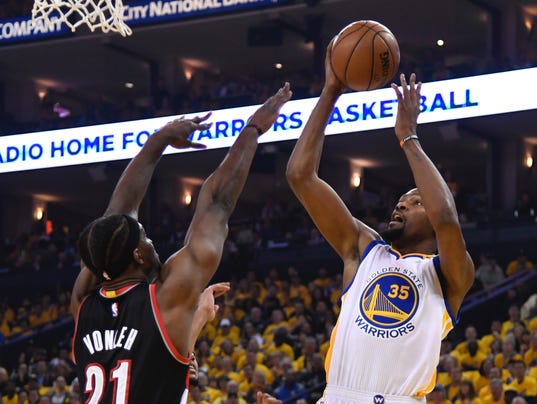 Golden State Warriors forward Kevin Durant (35) shoots the basketball against Portland Trail Blazers forward Noah Vonleh (21) during the first quarter in game one of the first round of the 2017 NBA Playoffs at Oracle Arena.(Photo: Kyle Terada-USA TODAY Sports)

The Golden State Warriors won’t have it any easier Wednesday night in Game 2 of their first round series against the Portland Trail Blazers.

Kevin Durant is out with a calf injury, as was suspected all day. Coach Steve Kerr confirmed the news at his pregame press conference.

“It’s not worth it,” Kerr added. “We’ll error on the side of caution.”

Steve Kerr explains why the Warriors are holding Kevin Durant out, saying he’d be an “idiot” to risk a “twinged” left calf pic.twitter.com/AzDC1PURBm

As we saw in the Warriors’ Game 1 win of their first-round playoff series, a 121-109 win at Oracle Arena on Sunday, the Blazers don’t have any plans of making…