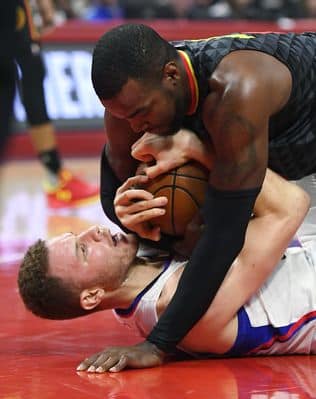 LOS ANGELES (AP) — Blake Griffin scored 17 points and the Los Angeles Clippers beat the Atlanta Hawks 99-84 on Wednesday night to head into the All-Star break on a four-game winning streak.

J.J. Redick added 15 points, Austin Rivers had 13 and All-Star DeAndre Jordan had 16 rebounds to help the Clippers beat the Hawks at home for the first time since March 8, 2014.

Dennis Schroder led Atlanta with 15 points, and Dwight Howard had 11 points and 15 rebounds.

Led by seven points from Raymond Felton, the reserves gave the Clippers the game’s first double-digit lead in the second. Down two points, Los Angeles outscored the Hawks 29-12, helped by five 3-pointers, to go into halftime leading 54-40. Jordan caught Griffin’s jumper that was going to be short and dunked it at the buzzer.

The Hawks never got a sustained run going in the third…