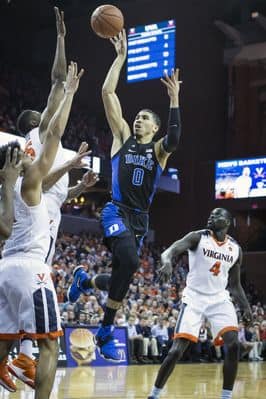 CHARLOTTESVILLE, Va. (AP) — Mike Krzyzewski took a unique approach to coaching after No. 14 Duke went into halftime trailing No. 15 Virginia, 25-21.

It might best be described as getting out of the way.

Moving away from called offensive plays and to a system that highlights the Blue Devils’ individual abilities, Krzyzewski’s shrewd move freed up freshman Jayson Tatum for a spectacular second half, and he led Duke to its sixth consecutive victory, 65-55, on Wednesday night.

“We were just trying to move the ball and give them the opportunity to be basketball players, which they are,” Krzyzewski said.

None benefited more than Tatum, who scored 21 of his 28 points after halftime, and three times made three-pointers with the shot clock racing toward 0:00. All three of the clock-beating shots came after Virginia had pulled within 43-42 with 8:33 left. The last made it 54-44.

“That was a big-time performance,” Krzyzewski said, laughing. “I mean, jiminy Christmas. It’s why we won for crying out loud.” 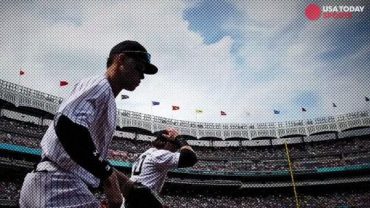