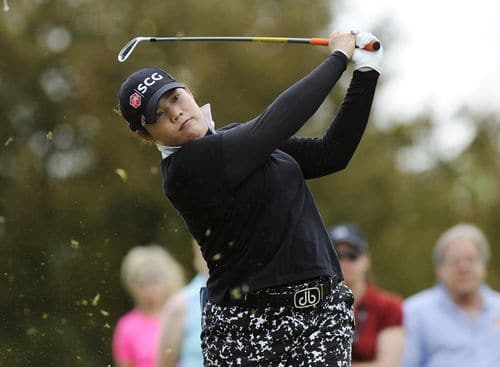 FILE – In this May 29, 2016, file photo, Ariya Jutanugarn, of Thailand, hits from the second tee during the final round of the LPGA Volvik Championship golf tournament at the Travis Pointe Country Club, in Ann Arbor, Mich. A day ahead of the start of the Women’s Australian Open at Royal Adelaide, the 21-year-old Thai golfer also says she’s not putting pressure on herself to overtake Lydia Ko for the No. 1 ranking. Jutanugarn will tee off in the first round on Thursday afternoon, Feb. 16, 2017. (AP Photo/Jose Juarez, File)(Photo: The Associated Press)

ADELAIDE, Australia (AP) — Katherine Kirk set the early pace at the Women’s Australian Open on Thursday, shooting an 8-under 65 at Royal Adelaide to take a two-stroke clubhouse lead.

The Australian, playing her fourth week in a row, birdied four of her first five holes and three of four in the middle of the back nine.

“There are low numbers to be had out there,” said Kirk. “A lot of birdie opportunities, and I was just fortunate I got off to a good start and kept the momentum going.”