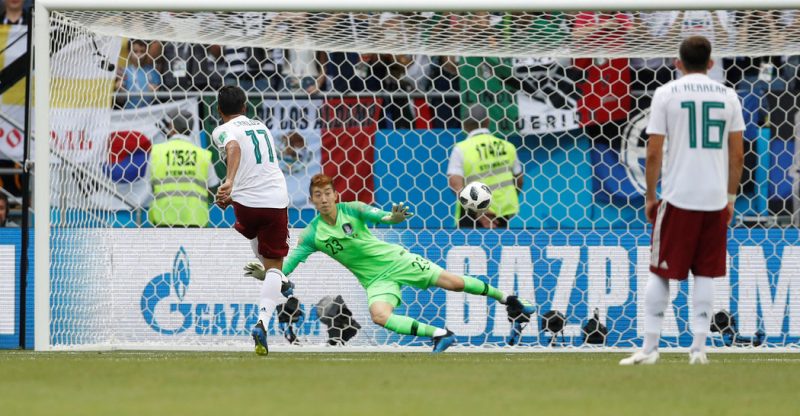 Well, Jo Hyeon-Woo decides to thoroughly one-up Ochoa on the other end. Guardado turns and puts a shot toward the upper left corner, but Jo makes a flying save to push it wide.

Mexico goalkeeper Guillermo Ochoa comes up big, getting both hands in front of a lazer from Ki Sung-Yueng from the left side of the area.

Mexico narrowly escapes returning the favor with a penalty kick. Moon Seon-Min got the ball near the six-yard box and got an off-balance shot off, but Carlos Salcedo was in the way. It first appeared that the ball might have caught Salcedo’s hand, but replays confirmed it was his chest.

A couple chances for Mexico, but both fly well over the goal. Lozano takes a hard shot from the left side off a feed from Vela, then a minute later Hernandez has a go from further out that also flies high.

The second half is underway. South Korea needs a goal to avoid a devastating second straight loss in the group stage.

Until May, Mexico didn’t have accent marks with players’ names on the back of its jerseys. Behind the…