Miguel Angel Jimenez of Spain in action during the first round of the Omega European Masters Golf Tournament in Crans-Montana, Switzerland.(Photo: Alexandra Wey, AP)

CRANS-MONTANA, Switzerland (AP) — Miguel Angel Jimenez fired a 6-under round of 64 to be in a three-way tie for the lead after the European Masters first round on Thursday.

Aged 53, Jimenez had seven birdies and a single bogey on the picturesque Swiss Alps course to share the top of the leaderboard with 30th-ranked Tyrrell Hatton of England and Scott Hend of Australia.

Jimenez also competes on the senior tour and already holds the European Tour record as the oldest winner. At 50, his 2014 Spanish Open title was his 21st on the tour.

Six players were one shot behind the leaders, including Thongchai Jaidee of Thailand. The European Masters is also an Asian Tour event.

Among five players on 4 under was American golfer Daniel Im, who aced the 175-yard (160-meter) eighth hole with a seven iron. 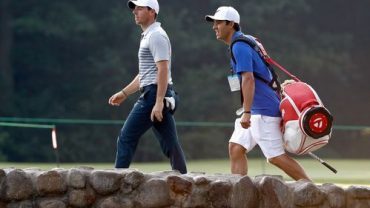