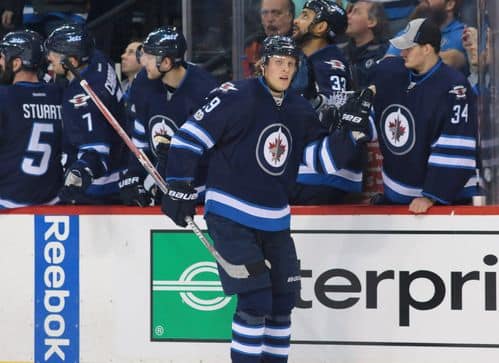 Winnipeg Jets forward Patrik Laine (29) celebrates with teammates on the bench after scoring a goal during the first period against the Dallas Stars.(Photo: Bruce Fedyck, USA TODAY Sports)

Laine got his third hat trick of the season, including the go-ahead goal late in the third period, to lift the Winnipeg Jets over the Stars 5-2 on Tuesday night.

It’s his second three-goal game against Dallas this season. The Finnish rookie has 26 goals, including two in the third period while Winnipeg blew open a tight game.

“It was a huge game for me and my linemates and the whole team,” Laine said. “These four last games haven’t been that good, so it was just nice to have a game like this.”

Jamie Benn and Tyler Seguin scored in the second period for Dallas to erase a two-goal deficit.

Connor Hellebuyck made 34 saves in his third straight start for the Jets since Ondrej Pavelec got a lower-body injury on Feb. 7.