NEW ORLEANS — After taking a hit to the side in the third quarter of Clemson’s Peach Bowl win against Ohio State, one of several body blows suffered in a memorable national semifinal, quarterback Trevor Lawrence came to co-offensive coordinator Tony Elliott and asked to limit some of the quarterback runs that had loosened up the Buckeyes’ talented defense.

Come the fourth quarter, after Ohio State had regained the lead, Lawrence returned to Clemson’s offensive coaches with an edit: “Forget that,” he said, recalled quarterbacks coach Brandon Streeter. “Call whatever you want. Let’s go.”

It was that sort of game, against an opponent Streeter called “one of the toughest football teams we’ve ever played.” Lawrence was sacked three times, tied for the most Clemson had allowed in a single game this season. He’d taken a shot in the second quarter — one that drew a targeting call that extended Clemson’s drive and changed the tenor of the game — that co-coordinator Jeff Scott, with a vantage point along the sideline, believed in the moment would end the sophomore’s night. Instead, it sparked the Tigers’ comeback. 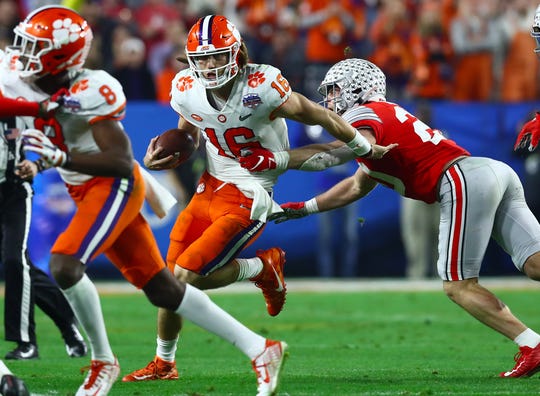