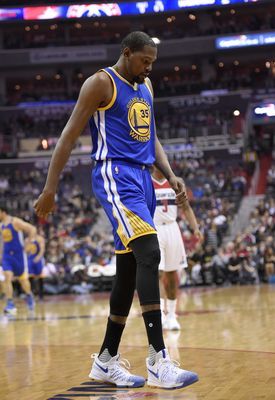 WASHINGTON (AP) — Kevin Durant has a hyperextended left knee and the Golden State Warriors are preparing for his absence even before knowing how long he could be sidelined.

Durant was hurt Tuesday early in Golden State’s 112-108 loss to Washington and the Warriors said he would have an MRI exam. Results are expected Wednesday but the Warriors aren’t waiting to line up another forward.

ESPN.com reported that Golden State would sign veteran swingman Matt Barnes. Barnes posted a picture on Instagram of himself in uniform from his previous stint with the Warriors from 2006-08 and wrote: “Coming back to where it all started!”

Durant left only 93 seconds into the first quarter. On a Wizards possession under their…